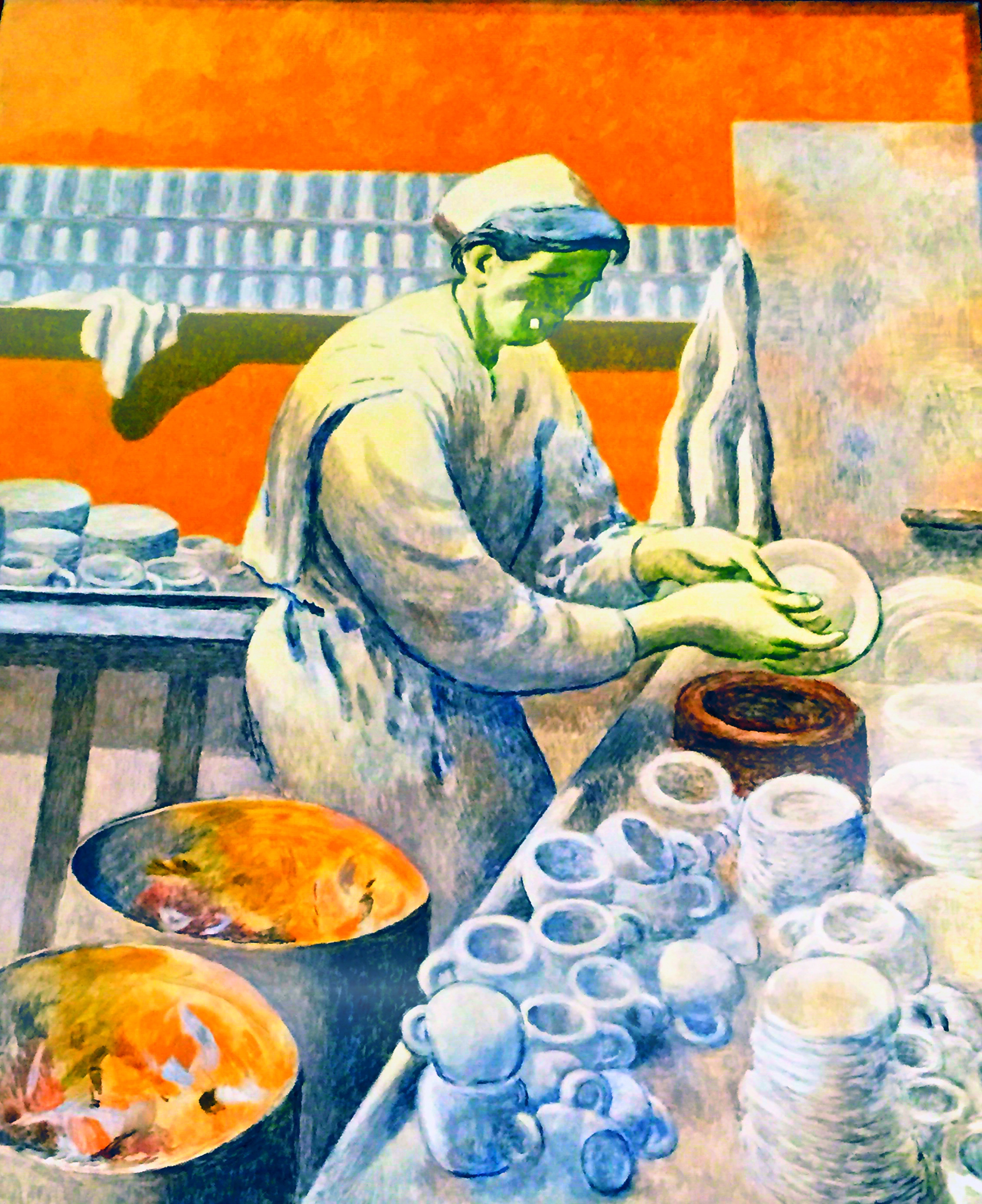 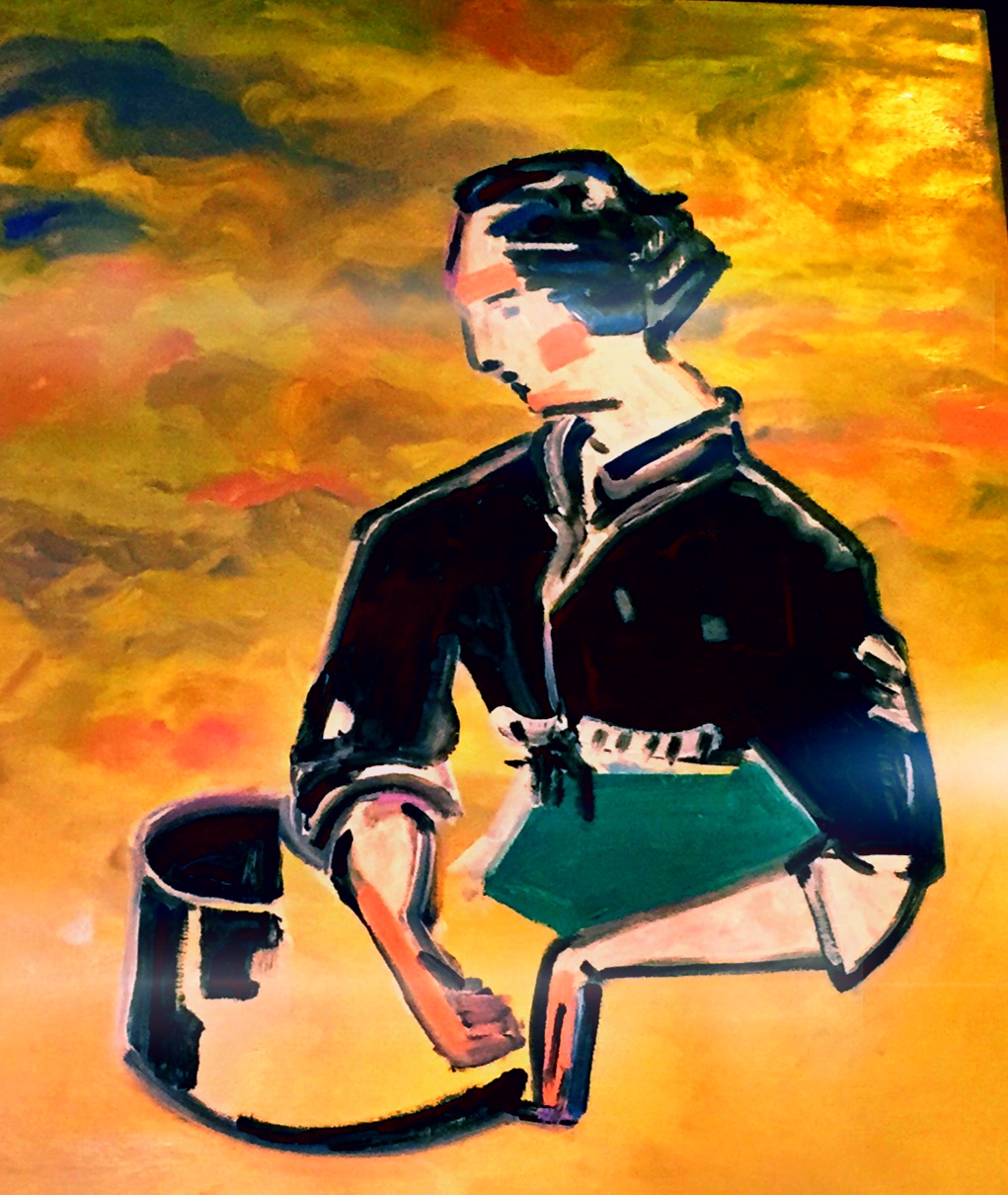 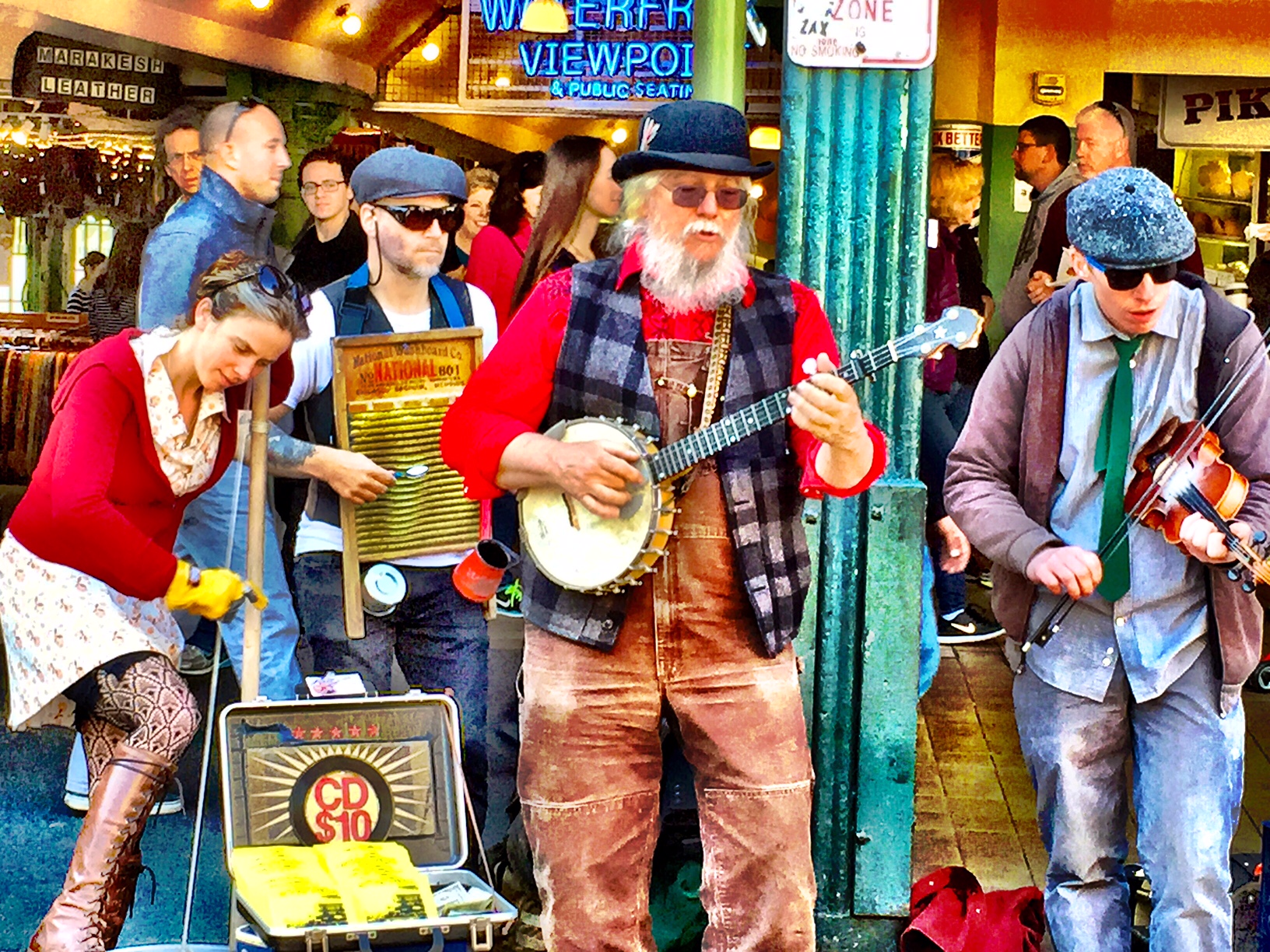 YeeHaw across from Lowell’s

We’re all loving Spring coming, as the best buskers stream back into the market for the next 8 or 9 months! Some of our favorites are the ones missed most when they’re not around, and when they return the vibes kick it up from some of the posers to the lifelong buskers that keep it real. Take out your earbuds and look and listen, and put down your phone-camera poles to experience the flavors at the source instead of back home in your living room. Some things don’t translate to your iPad!

Us, here, at “TheBar@TheMarket”, 2nd floor of Lowell’s

Lowell’s Dehydrating laboratory and test kitchen at the old homestead!

OK, we eat and drink for a living; not a bad job! Whether its coming up with new items for the restaurant or for the bar, it usually starts at home where I have the room to break out all the equipment Lowell’s doesn’t have room for and I have fun trying out original inspiring thoughts before bringing them into action on our menus.

As long as I don’t leave my messes to  my wife Kristie to clean up afterwards (at the restaurant we have no space, but a lot of hands to help!) then all ideas are good until proven otherwise! This Spring and Summer we’ll be rolling out fresh new items, whether from my “test kitchen” or from Juan and his crew’s authentic fresh salsas and Latino recipes as always. Something new every few days, come in and try some on any of our three floors with the best water views in Seattle! Open at 7AM daily, bar included.

Mark & the gang of Lowell’s Merry Pranksters! (Giving due thanks to Ken Kesey and his inspired homemade concoctions, ahem…) 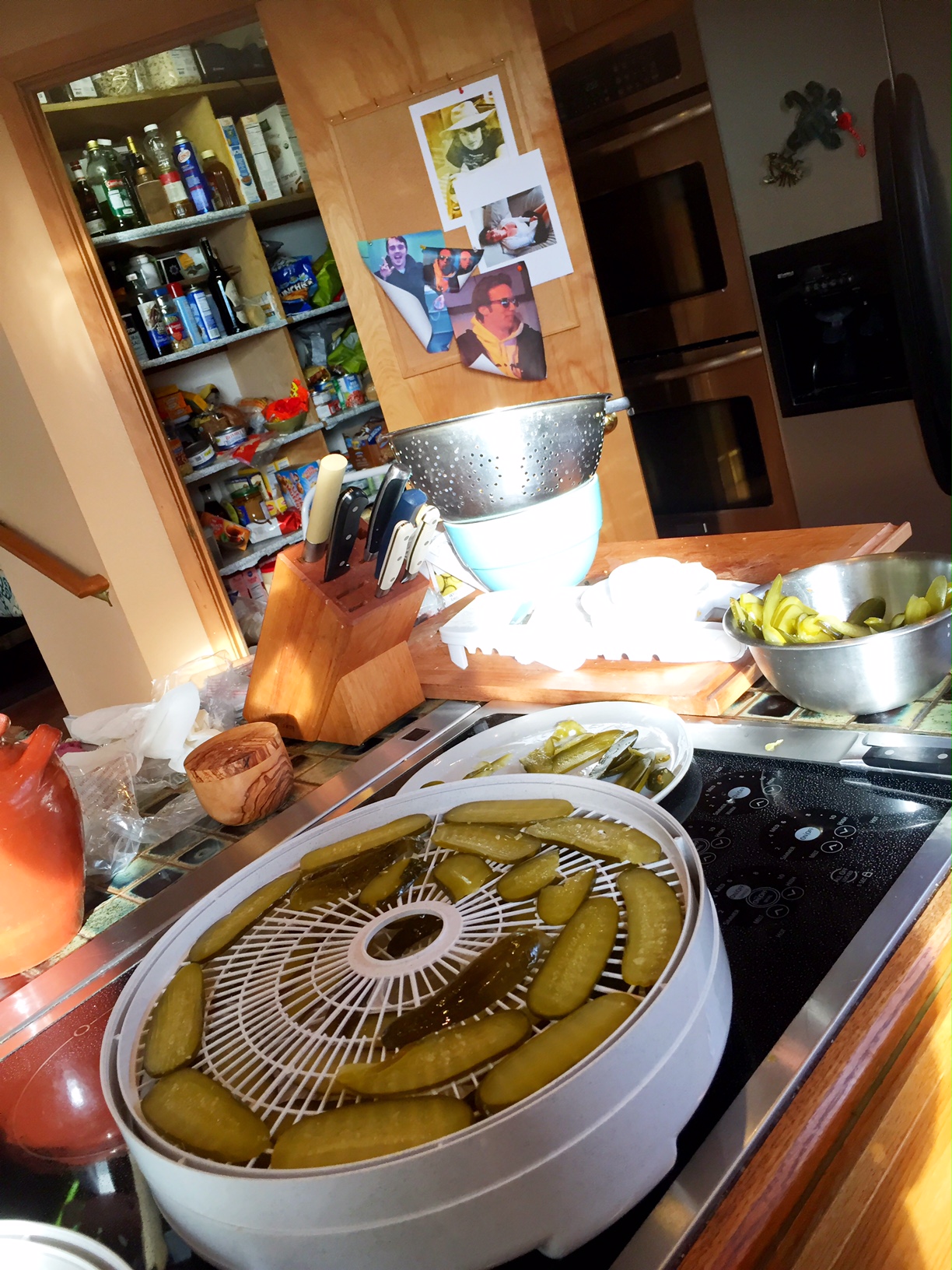 Home Made KIMCHI MARY’S, only at Lowell’s!

Inspired by a friend that was making some Kimchi a few months back, while I was in the middle of dehydrating pickles to make a “salt” to rim a different special bloody mary concoction, we developed another in our growing list of signature blody marys! First, we make a batch of great Kimchi (we brine Nappa cabbage, ginger, Korean chili paste, shrimp, daikon radish, green onions, rice wine vinegar, spring water, sea salt, raw sugar, and a bunch of fresh spices too lengthy to mention in a large vat with the brine covering the it all by 3 or 4 inches, and weight it down to keep submerged. Ferment at room temperature for a few days (you can ferment longer, perfectly safe, but it gets FUNKY the longer it goes, and we want delicious, not last years mulch! Then we strain the brine several times and we’re left with a complex liquid to add to our scratch bloody mary mix. We bottle up our Kimchi Mary mix with the addition of 1 & 3/4 ounces of triple distilled vodka and refrigerate these “made daily” cocktails in their own bottles ready for service. Order one up, we’ll serve you the bottle alongside a glass that’s rimmed with our new “proprietary blend” of homemade pickle salt as well as our house pickled green bean and limes and onion garnish. The Kimchi brine added to our great blood mary mix adds another dimension to the bloody mary, and the “pucker up pickle salt” goes perfectly as well. Gotta admit, you’re interested! Come in and try one or three. Coming soon, our homemade bloody mary ‘flights” with a paddle of three different smaller versions of some of our signature fresh infusion blood marys!

Visit TINA for our new 7 day a week happy hours on all three floors, 4PM til close!

Freshest smiles along with the freshest drinks, Tina pulls it all together as the happiest bartender/hostess of the party in Seattle. Prove me wrong? Won’t happen! 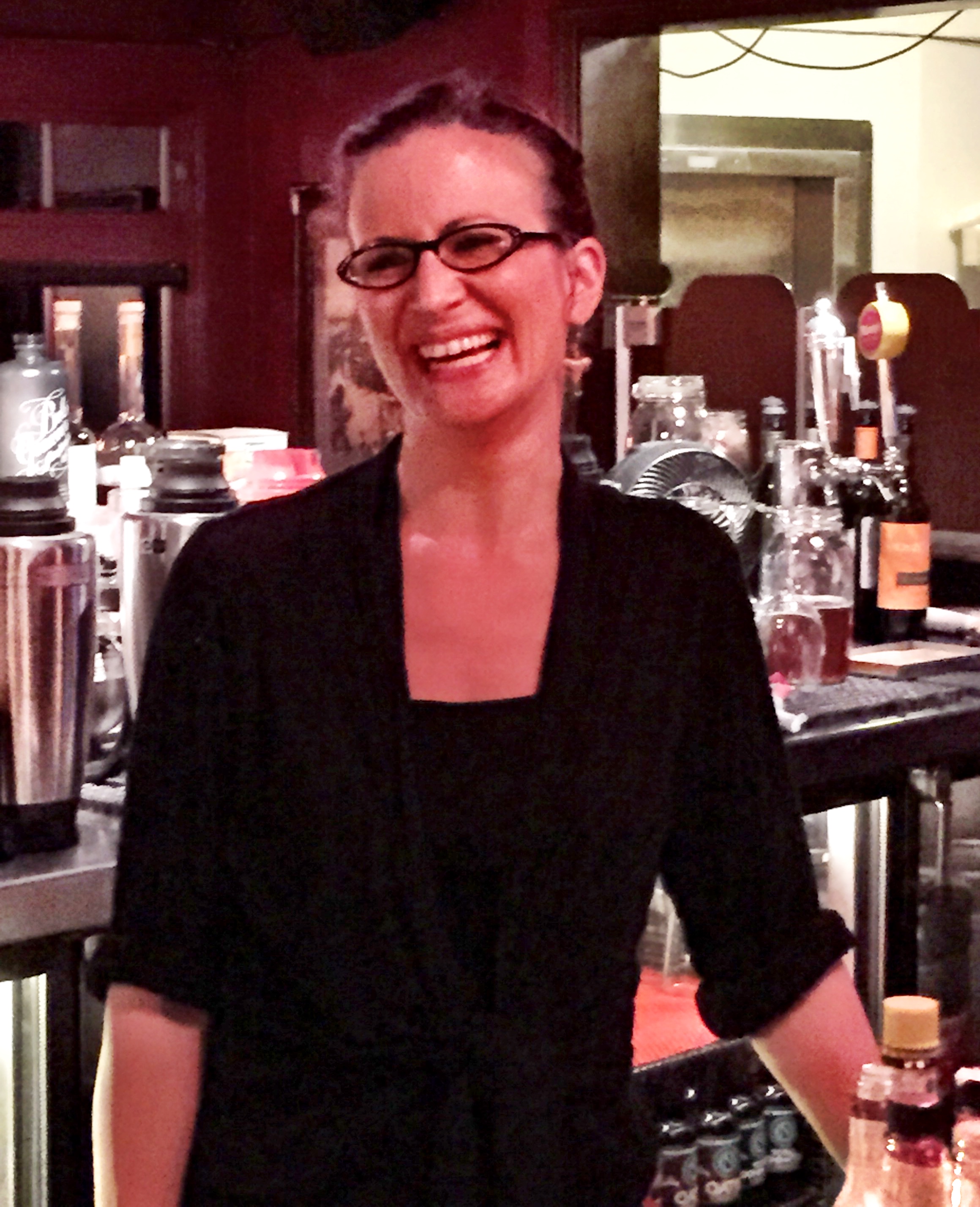